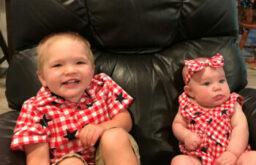 I always believed that having children would be easy. My mother had four children without challenge. My husband and I never imagined how hard it would be to become a family. After my OB tried Clomid, she referred me to NewLIFE. I did my research and was hoping for a miracle.

We conceived in the spring of 2017 with only IUI, and we began dreaming of what our little baby would look like. But those dreams met reality a couple of weeks later when our ultrasound had no heartbeat. The entire office staff was so compassionate, just amazing and I held it together until I got to the car and then I lost it…devastated…so unfair. After some denial, anger, grieving and “what if’s” we were ready to return to Dr. Ripps, reviewing our problems of endometriosis, and the dreaded “low ovarian reserve”. Dr. Ripps performed surgery and a very thorough surgery treatment of my endometriosis, and afterward told my husband that he was very confident for pregnancy. The next month we began using fertility medicines and IUI with ANOTHER conception. I felt so excited and worried at the same time, but in April 2018, I gave birth to a healthy baby boy three days before the anniversary of our first miscarriage.

In August 2018, we found we were pregnant again WITHOUT fertility treatment. I thought that I had beat infertility, and we could continue to grow our family on our own. In October, I had my first ultrasound and the baby had no heartbeat at 8 weeks. Again, I was devastated. We were surprised but excited about this pregnancy. My husband and I really wanted a sibling for our son.

In February 2019, we decided to do another IUI round with fertility medicines. I was so excited because we had been successful with this method. After two failed attempts, we met with Dr. Ripps to discuss what our options were. He was so kind, compassionate, and understanding. He discussed our options and told us which option would have the higher rate of success. We appreciated that he did not “sugar coat” our options but was honest and sincere. From our experience and problems, he told us that we had a fair (not great) chance of IVF working for us. Hearing those odds was hard, we were about to spend a lot money on those odds. We prayed about it, and we felt like we had to try or never know what could have been.

To say that I was worried and anxious was understatement, I followed all the directions to the “T”. The office staff and IVF coordinator were amazing during this time. It was easier than I had feared to follow the instructions. They were so clearly laid out! Dr. Ripps harvested my eggs, and with low reserve, SEVEN of them was more than we expected. The wait to see which ones would make it was nerve wracking, but the IVF Coordinator was so sweet to us, calling to give me updates and encouragement. On Father’s Day, we had two embryos placed. At our first ultrasound we found that one made it. We were so thrilled! Pregnant again, but after all we had experienced, there was persistent anxiety and worry through the first trimester. Then we found we were having our baby girl, healthy and growing appropriately.

Now, she is truly daddy’s girl. You all must know there are no words to share how grateful we are to Dr. Ripps, the IVF coordinator and all the staff on this incredibly dedicated team assembled at NewLIFE. Our journey to have a family has been hard, depressing, and frustrating at times. But we have learned so much and found the support and faith to keep going. It is worth it. Dr. Ripps is a true expert in this field and is up to date on the latest innovations. He truly cares about his patients and wants nothing more than for them to be successful. I think one of my favorite parts of visiting the NewLIFE office is seeing all the successes that have been made. Those helped me through it all, too.