With the right care and support, even the worst can be overcome. 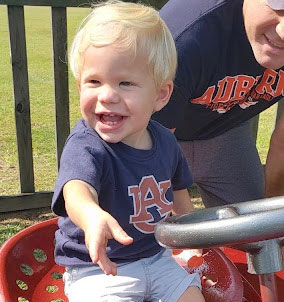 Growing up I never had a strong desire, like so many women, to have children. I knew I wanted kids, but I was fine waiting until I was 30, even though I had been married since I was 21. Seeing friends with babies, never invoked a passion in me to have kids. I thought, well when it happens it happens. I was perfectly fine being childless, until I wasn’t. I suddenly went from being apathetic about having children, to doing whatever it takes.

After roughly 2 years of trying to conceive, I mentioned to my OBGYN that we had been casually trying to no avail. My doctor suggested we start with a semen analysis, as that is the easiest and usually the first thing they test. We received the results that my husband’s analysis was not great. I didn’t understand what the results meant, mentioning words like “motility,” which meant nothing to me. We had so many questions. They referred him to a Urologist and that is when our long journey began. He had another analysis about a month later with the Urologist, and the results were even worse. The doctor basically told him there was nothing he could do, and our chances of getting pregnant naturally would be about 10%.

After another appointment with my OB, she referred me to Dr. Ripps at NewLIFE. I was literally terrified about our first consultation. I would have never thought I would need the help of a fertility specialists to start a family. After two more semen analysis in the NewLIFE office were worse, and several appointments and detailed discussions, we realized there was no point in trying IUI.  IVF would be our only solution.

The staff at the Dothan NewLIFE clinic was very caring and helpful along our journey. Through all of the testing and small procedures, they were always encouraging and offered us hope for having a family. We were elated when our first round of IVF was “successful.” We had 6 beautiful embryos and conceived with a fresh embryo transfer, but at 16 weeks, we lost our first child. The shock was life altering. We didn’t know how to move on from that point, but something inside me kept telling me not to give up. We would never “get over” our loss, but we knew we had to keep trying. So after a month or two, we were ready to meet with Dr. Ripps to discuss next steps.

There were no answers or explanations for what happened. Nothing conclusive came back from testing of the fetus to know what caused our loss.  In addition, NewLIFE did thorough blood testing on me for possible causes of miscarriage, but the results came back normal.  Not having concrete answers was hard. How could we be sure it wouldn’t happen again? Basically, we couldn’t. Medically, nothing indicated that it would happen again, but emotionally, I felt like having a child was never going to happen.

I was terrified but 2.5 months after our miscarriage, we were back in the Pensacola office doing a frozen embryo transfer.  We conceived again but this time succeeded with our miracle little boy. He is now 15 months old and absolutely perfect.

If it wasn’t for the doctors and staff and NewLIFE, I just don’t believe we would have kept going. They had unwavering faith that we would have a child even when we didn’t. The process was emotionally draining and hard, there is no way around that, but it can be made a little easier if you have the right people there to guide you every step of the way. We are forever grateful to NewLIFE for giving us our family!

We hope our story can give hope and encouragement to someone in the thick of it. I can honestly say, what we have now was worth the waiting and the challenges!