I am sharing my story, hoping to encourage others to confidence and to be proactive.  My diagnosis was PCOS at age 22. As I always knew that I wanted to have children, the PCOS label concerned me, and I suspected I should get started sooner.  I met with Dr. Ripps at NewLIFE several years ago, and it was clear for me that weight and diet were significant factors for my PCOS symptoms.  No one wants to hear that, right?  I would rather just take some pills to get pregnant.  That is precisely what I did, fertility medications, metformin and other pills to try to suppress the PCOS and make me ovulate.  Nothing happened and the stress of it all helped put an end to my first marriage.

Sometimes the bad things that happen bring other, more positive outcomes.  I found and married my “best friend” and for 7 years, we had intercourse without birth control.  Now at 33, I still wanted children so much, maybe even more so, with this, “the right man”.

I had flashbacks to Dr. Ripps. I already knew what he would advise.  Perhaps I was more mature about it, or had accepted my parents’ gifts of genes that cause my PCOS.  This time I was self-motivated.  I joined a gym and went 5 days a week. I re-read the materials that Dr. Ripps had given me 7 years ago.  I changed my diet, my lifestyle, and my self-image. OMG, I started losing weight!  Slowly, the pounds melted away and I felt great!

I lost 35 pounds and had more energy than before.  Then, in March of this year, when I left the gym one evening, I was driving home and felt unusually exhausted.  I was pregnant!  Eight (8) weeks pregnant.   I wasn’t having regular periods, so who would have known.

I am doing great and achieved my pregnancy without drugs, without IVF, and I feel great.  Dr. Ripps says I did this “all by myself”.  But, honestly, I would not have known what and how to do it, without the guidance of a specialist.

Ladies, if you are reading this and you have PCOS, go see Dr. Ripps or a fellowship-trained, Board-certified “reproductive endocrinologist”.  Do not settle for routine ObGyn care if PCOS is your problem.  This one step will make all the difference in the world ! 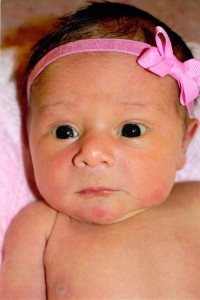 After trying on our own for years, my ObGyn was certain it was the problem was “PCOS” as I had irregular periods and had gained weight. The test to check my tubes were open was good and my husband’s test was normal.

After looking at all that we had been through, Dr. Ripps attempted to tackle the delicate subject, the “elephant in the room.” I didn’t know there were studies showing a connection between gaining weight and infertility. Dr. Ripps tries hard to teach and I really needed his encouragement and got it. He provided me a customized lifestyle for PCOS and with my husband’s support too, I was able to lose 30 pounds over a 3-4 month period.

My periods become more regular and I must have begun to ovulate on my own, because we became pregnant WITHOUT ANY MEDICATIONS!!!!!!! Couldn’t believe it….no pills, no injections, no inseminations.

We could not be happier now. Our lives are so fulfilled. Even if our story seems simple, we hope it’s a source of hope and encourages others to keep trying. Simple words of advice: “get healthy before trying to get pregnant.” That’s what worked for us.

Best wishes, too, to those reading this. We lived in Memphis, when my husband and I started trying to conceive our second child about 5 years ago. Without any luck, I saw a fertility specialist in Memphis and my diagnosis was PCOS.  With medication I eventually became pregnant, but it was an ectopic pregnancy.  The baby had a heartbeat but was not in the right place.  The emergency surgery took the baby and my left tube.  Six months later, I was pregnant again, but this time I miscarried.

We were emotionally exhausted and decided to take a year off during which we moved to the Alabama Gulf Coast. At this point, my heart had decided on adoption, but my husband wanted to try one more time for a baby of our own. Third time’s a charm, right?

I went along with my husband eventhough I thought my mind was made up. Then we met with Dr. Ripps. He made us feel comfortable and gave us hope that getting pregnant and successfully carrying a baby all the way was really possible. Together When we met with Dr. Ripps in July we decided together that IVF was the right choice and by August, I was PREGNANT !

This time our baby grew where she needed to be and her heart had started to beat. No words could ever describe the joy we felt to see her on the ultrasound for the first time.   I dreaded having to leave the NewLIFE office because everyone there was so comforting and helpful.  Linda was my support a few times even after I was referred back to my ObGyn, because I valued and trusted her opinion.Baby_Ross

Thank you, Dr. Ripps, Linda and the rest of the amazing Team at NewLIFE for helping us bring our sweet daughter into the world.

PCOS? ….not so big of a problem After years with no ovulation, just being able to make eggs made a baby. Though we each had children from previous relationships, we decided that we really wanted another baby and began our quest. Our three-year journey to becoming parents again began with a vasectomy reversal.

After the “surgically successful” vasectomy reversal, we tried on our own for over a year and to our surprise, nothing happened. My OB/GYN started me on Clomid for 5 months without a pregnancy and without answers, so we tried on our own for several more months. During this time pre-cancerous cells were detected on my cervix, requiring a surgical procedure and delaying further attempts. My OB/GYN continued to encourage me to try more Clomid but this time with Glucophage. After 3 months, he told me there was nothing more he could do for me and wanted to refer me to Dr. Ripps. All this had taken 3 years and I was then 35. I just didn’t think I could take much more physically or emotionally.

After a few months of not knowing what to do, I visited the NewLIFE website and began reading the testimonials on the site. There were so many others who had success after some really tough times that it gave me the strength and encouragement to try again. My initial consultation was also encouraging. As a reproductive specialist, Dr. Ripps said we had several options that we had not tried before. But I tried not to get my hopes up in fear that treatment would fail again. But the NewLIFE team was so upbeat and positive at every visit it was hard not to believe that it would work, and it did!

The first attempt to make me ovulate worked in October 2008 and we were finally pregnant! Today we have a beautiful daughter. Her middle name is Faith because it took all the faith I had to continue forward with a dream. Thanks to the support I received from Dr. Ripps and his wonderful staff our dream came true. I am thankful everyday for trying that one more time and for NewLIFE in helping us to complete our family.

NewLife diagnosed me with PCOS. After following their advice for 6 months, I became pregnant. After three years of temperature charts, ovulation kits, fertility drugs, and disappointments, I decided to see a specialist. On my first visit with Dr. Ripps, I was evaluated and diagnosed with P.C.O.S. Within a month, I was armed with specific and easy instructions, and started a weight loss program with diet and exercise.

I was shocked just six months later to find out that I was pregnant WITHOUT medications. My beautiful little girl will soon be one year old. She is so precious! Diet and exercise now seem such a very small price to pay. A special thanks to Dr. Ripps and his wonderful staff for their knowledge and encouragement!

From Alabama to care in Pensacola was the best thing we could have done. “After a year and a half of trying to become pregnant and then having a miscarriage, we decided to see Dr. Ripps. I was diagnosed with P.C.O.S. I started a special diet and continued it for about 6 weeks. After just one round of clomiphere with insemination, TEN DAYS LATER, we found out we were pregnant. On April, I gave birth to a beautiful baby boy, Infertility is heart breaking and frustrating to deal with, however, being treated by a doctor who cares, who you can trust, and who will take care of you, makes all the difference in the world.”

Ovarian drilling by NewLife gave us succsss In October my husband and I tried to conceive our second child. After several months of having no luck, I visited my OB/GYN in January. After several attempts with different rounds of clomid and being diagnosed with PCOS my doctor reffered me to NewLIFE. I had my first appointment with Dr. Ripps in November.

We attempted to conceive with several rounds of newer medications by mouth that only regulated my cycles sometimes. But when this also failed, our next step was surgery and ovarian drilling in February. I missed my period in April and went I decided to take a pregnancy test. I had taken so many test in the past with negative results that I had no reason to think this one would be any different. When I saw the 2 blue lines I cound’t believe that I was pregnant. I immediately asked to tested again.

The ovarian drilling did the trick! My family and I feel so blessed to have known Dr. Ripps and his staff. They were always so kind and so encouraging with every new procedure we tried. I gave birth to our second child, Makayla Leigh in December. My family and I would like to say thank you to Dr. Ripps and his staff for always being so kind and courteous. Their commitment to us meant so much. We feel so blessed to have known you all. Thank you!

Convenience is important to everyone these days.
NewLIFE has developed an "online" submission for new patients, saving time and paper. Couples are then able to meet with the staff to begin their evaluation more quickly and accurately with minimal disruption to their careers and daily activities...